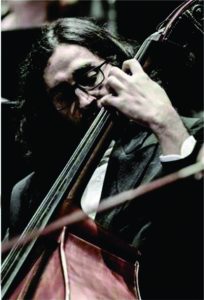 During his studies, in 2009, he won the audition for the “Orchestra Giovanile Italiana” as a tutti double bass player, where he had the opportunity to study with Maestro Alberto Bocini. In the following years, he attended masterclasses with Božo Paradžik and Catalin Rotaru.

In 2012 he was a finalist at the International Competition Basseurope Festival in Copenaghen.

In 2013 he won a special prize for the performance of Koussevitzky double bass Concert at “Premio Nazionale delle Arti” in Benevento. In the same year he has been in Tallinn for his Erasmus experience at the Estonian Academy of Music and Theatre, where he studied with Maestro Mati Lukk. Moreover, as a student he had the opportunity to join the ERSO National orchestra with the conductor Neeme Yarvi.
Since 2014 he is a fulltime member with the Malta Philarmonic Orchestra.