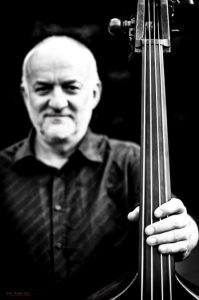 Jiří Hudec was born in Brno in 1953 and studied at the conservatory there under Julius Vetruba. In 1977 he graduated from the Janacek Academy of Music and Arts, successfully auditioning for the Czech Philharmonic Orchestra in the same year.

He has enjoyed success in a number of international competitions, notably in Markneukirchen in the former DDR in 1975 finalist, in 1977 2nd prize, in ARD Munich 3rd prize, and at the first Isle of Man International Double Bass Competition in 1978, which he won outright. This led to a broadcast solo recital in London’s Wigmore Hall and the world premiere of a concerto written for him by Richard Rodney Bennett with the English Chamber Orchestra under Michael Tilson Thomas in the Queen Elizabeth Hall.

Hudec is currently the principal Double Bass player for the Czech Philharmonic, taking over from František Pošta and Zdeněk Benda in 1990.

Since 1980 Jiři Hudec has been a member of the faculty at the Prague Academy of Music and Arts where he lectures keen musicians. In 2001 he joined the academic staff of the Royal Northern College of Music in Manchester where he now teaches on a permanent basis. Jiří Hudec was recognised for his accomplishments, rewarded with an induction into the Fellowship of the Royal Northern College (UK).

He took part in seminars and masterclasses in Tokyo, Toyama and Memambetsu in Japan, Sommerakademie in Detmold  and Dresden, Capbreton, Glasgow, Beijing, Bass club at Menuhin school. Since 2013 leads regularly masterclasses at ISA Semmering (Austria).

He is invited as juror  to international competitions –  last one 2015  in Ankara  and  2016  in most prestigious ARD Munich.

Chamber music plays an important part in Hudec’s professional life. A member of the Czech Philharmonic Octet, Hudec works regularly with three of the Czech Republic’s most successful quartets, the Pražak, Kocian, Skampa and Stamic.

Most significant, however, is Hudec’s long-standing partnership with his colleague from the Czech Philharmonic, principal cellist František Host.
http://www.hudec.org